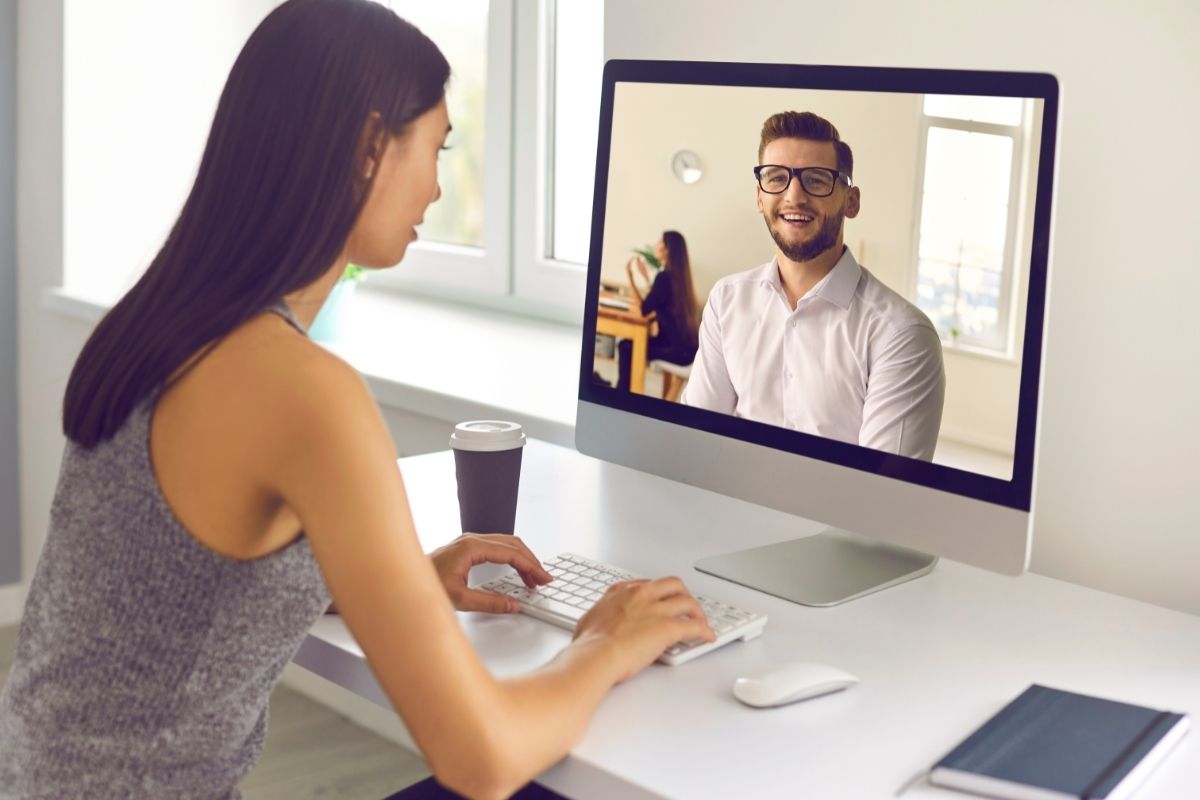 Best Color To Wear On Zooms

In today’s world, having a video conference call for a job interview or a professional meeting is commonplace. This mode of communication has grown in popularity in recent years, particularly since the Covid-19 outbreak disrupted our ability to communicate and interact in person.

It can be challenging to choose a suitable form attire for these occasions, especially knowing that the other persons on the call can only see you in a small square on their screen.

However, it is still important to dress appropriately, even if your colleagues won’t be seeing the full details of your outfit. The main aspect to consider, while selecting an outfit for a Zoom meeting, is the color.

Which colors are best for Zoom calls? Should certain colors be avoided altogether?

Continue reading to learn about which colors you should wear, and other fashion statements to be considered (or avoided) during your next call.

Avoid Wearing Colors Similar To Your Background (Don’t Blend In!)

While being on a Zoom call, it is so important to take your background into consideration. Most people vouch for using a plain wall as a backdrop.

If there are other things going on behind you while you are on a video call, e.g., pets or family members walking around, it can become distracting for the person (or persons) who you are speaking to.

So, let’s assume that you are facing away from a plain, white wall during your call: the worst colored clothing you could wear would be white. By wearing a piece of clothing that is exactly the same color as your backdrop, you will simply blend in with the background.

On a Zoom call, you will want to stand out! If your background is white, consider wearing a darker color in comparison.

It may help to think about complimentary colors on the color wheel.

Therefore, if your background is colored blue, wearing something orange will make you really stand out, popping with color.

Other complimentary pairings include yellow and violet/purple, and green and red.

While black may be considered to be a fairly professional color, and can make most outfits classier, it may be best to avoid this color while being on a Zoom call.

There are several reasons for this.

For starters, depending on the lighting in your room, dark-colored clothing may cause you to look startlingly pale and washed out. If you have pale skin, this combination may not be the greatest idea, especially when trying to appear professional on a work call.

It may also draw all attention away from your face if the lighting is pretty bright, and you are against a lighter colored background.

If you are presenting over a video call, it may be difficult for your colleague to focus on you if they are distracted by the darkness of your outfit compared to the rest of your appearance.

Additionally, due to the pixels on a computer screen, darker colors may emphasize dark bags under a person’s eyes, and can even cause shadows on parts of your face and body to become more pronounced, such as double chins.

Dark colors will also make you appear smaller on screen, which is not something you want while being on a Zoom call. Again, the last thing you want to do is disappear into the background!

Overall, while it is perfectly suitable to wear black or other dark colors to face-to-face meetings, you may want to avoid wearing darker outfits during Zoom meetings unless you have excellent lighting and camera quality. 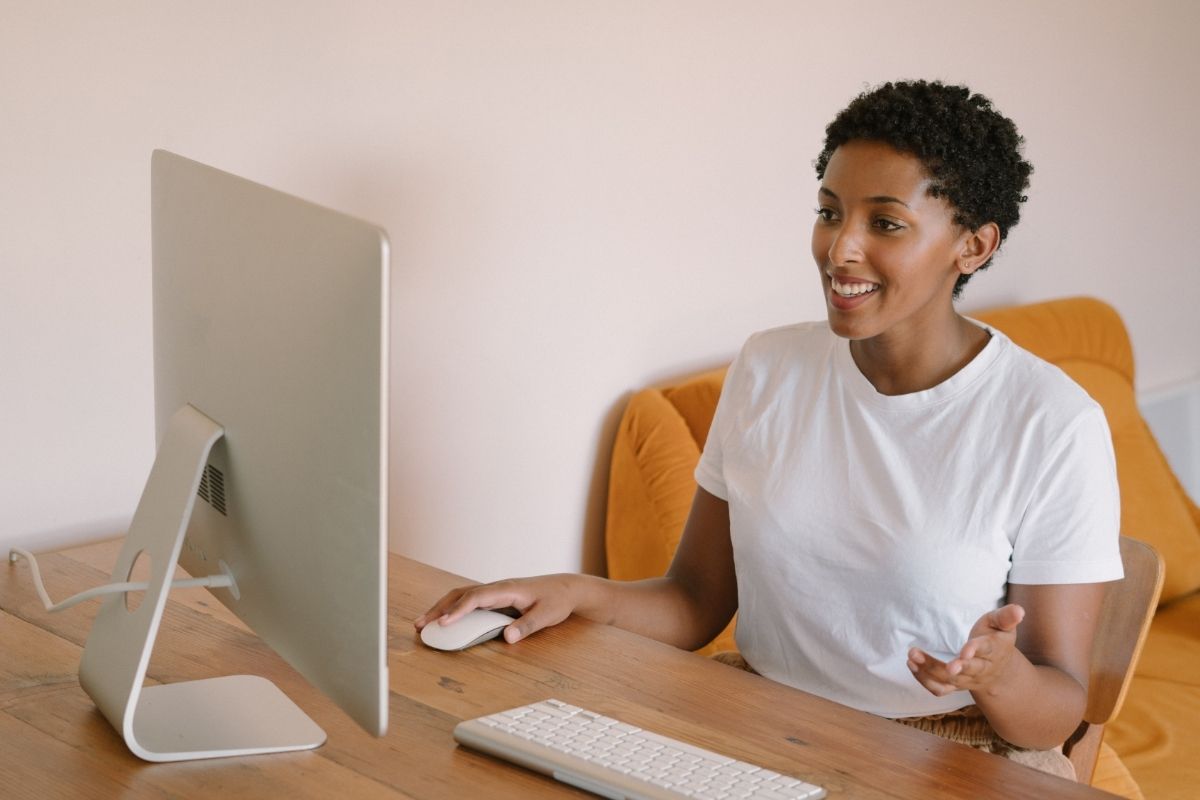 So, you may have read the previous section and assumed, naturally, that the best color of clothing to wear on a Zoom call is white.

You would be wrong to assume so.

Wearing extremely light colored clothes can be just as problematic as wearing darker clothes! Most people will have a light background while being on camera, whether they have a white wall behind them or a light sheet.

If this person is wearing white, they will completely blend into the background.

As we previously mentioned, the lighting of the room that you are in may cause your face and skin to appear lighter than usual.

A piece of white clothing can wash out the color of your face just as much as a black piece of clothing, except in this case, your skin may appear to be the exact same shade as your clothes. You would appear to be a long, white blob onscreen.

You want people to notice your face and eyes first, rather than your clothes. To compensate for the light, the camera concentrates on the white and light portions of your Zoom box, darkening everything else.

Other colors to avoid are baby blues, pale pinks, creams, and ivories.

While it is important to stand out while taking part in a Zoom session, there is sometimes such thing as standing out too much.

Outfits that display excessive amounts of glitter and shiny fabric can be extremely distracting for everybody involved, especially when being displayed on a video call.

The shards will catch beams of light whenever you so much as move your arm slightly, creating sparkles on your screen each time you do.

Additionally, outfits that display outlandish patterns will also catch everyone’s attention, but not in the way that you would like them to.

Large patterns, such as stripes, plaids, or geometric prints, should be avoided at all costs so that you don’t become just another pattern in the background of your Zoom screen. These distracting patterns will make it more difficult to fully concentrate on you.

Wearing a solid color that is totally different from your background is your best bet. In the middle section of your Zoom frame, you’ll operate as a color block to draw attention away from what’s behind you and draw emphasis to yourself.

The main goal here is to remove any distractions that would divert the viewer’s focus away from your face and torso, which is what they should be fully focusing on.

Wearing green colored clothes while being sat in front of a green screen is, quite simply, a recipe for disaster.

The color green, and even certain shades of blue, will cause your clothing to become transparent against the green screen.

This means that whatever you display on the screen behind you will appear as part of your clothing, or, even worse, may cause your torso to disappear altogether.

If you’re utilizing a virtual green screen, the clothing you’re wearing must be a strong contrast to the color of your background, or else, you’ll become invisible and blend in with the background image.

You should avoid appearing as a floating head on your Zoom call if you want to be considered seriously!

Which Is The Best Color To Wear On A Zoom Call?

However, the title of this article is ‘Best Color to Wear on Zooms’: therefore, we probably should mention which colors you should be aiming for.

So, which is the best color to wear on a Zoom call?

According to research, the best color to wear while being onscreen at a Zoom meeting is a bold, bright blue.

Blue is probably the most popular color to wear on a Zoom call due to the fact that most people won’t have a blue background. This means that, by wearing bright blue clothing, they will completely stand out from their surroundings.

Let’s return to the idea of complimentary colors for a moment: the color opposite to blue on the color wheel is orange. A large majority of people will have cream-colored walls in their offices or bedrooms, whether their walls have been painted or wallpapered.

Cream is a very light shade of orange, meaning that blue compliments the hue fairly well.

So, if you would like to stand out and make the best impression on a Zoom call, your best bet is to raid your wardrobe for a nice, bold blue-colored blouse or a jacket.

Additionally, other bright colors are also recommended, such as fuchsias, teals, or purples.

While taking part in a Zoom meeting, your main goal should be to stand out and make your presence known, even if you are speaking with several other people.

The most crucial thing you can do to grab people’s attention and to get them to give heed to what you’re saying is to encourage them to concentrate on your face and body. You will want to take the center of the screen, filling up the middle third of the box.

So, all in all, your best bet is to wear a bright color to capture their attention, making your presence known.

We hope this article helped you discover which colors to wear (and not to wear) on your next Zoom meeting.