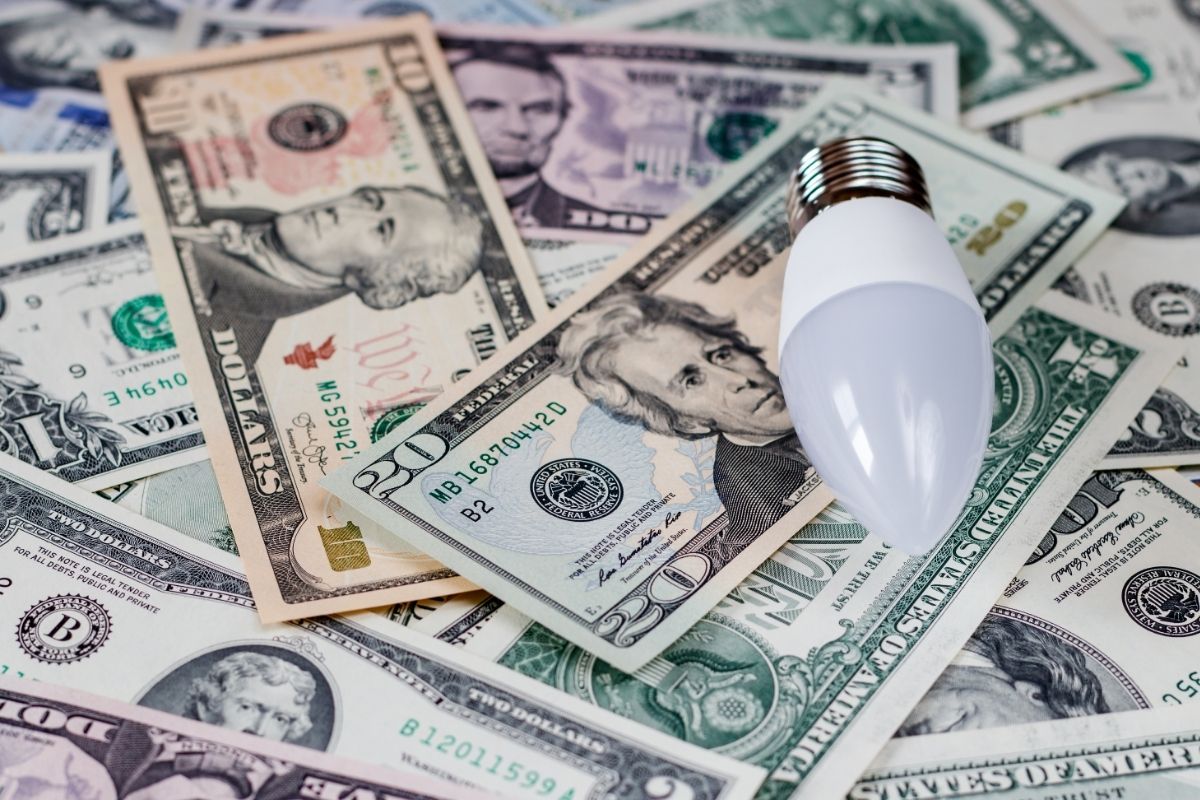 If you’re making the move to LED lights – or are just looking into them – then you’re probably curious about how they’re going to affect your electricity bills.

After all, it’s already expensive enough to light up a room – so do you have to worry that LED lights are going to increase your energy costs?

Well, you’ll find out all you need to know with this handy guide!

What Are LED Lights?

Compared to the incandescent light bulb, which has been in widespread use across the world for over a hundred years, LEDS are a relatively new technology. In one sense, they work very similarly to incandescent bulbs – they take electricity and turn it into visible light!

From the user’s point of view, that can be all that you often need to know. Plug one of these bulbs in, and they’ll make light, just as you’re used to!

However, there are some really interesting differences between LED bulbs and incandescent bulbs. They’re the sort of differences that should definitely influence your purchase choices – but don’t worry, you’ll learn all about them here!

An incandescent bulb, which is the oldest type of bulb, is a relatively simple concept. They work a little similarly to electric heaters, actually! You’ve got a coil of wire inside an electric circuit. When electricity passes through the wire, it gets hot!

The more electricity you pass through it, the hotter it gets – which is why you can often see the coils on electric heaters visibly glowing red.

Incandescent light bulbs work in pretty much exactly the same way – there’s a very thin coil of wire (called a filament) that gets so hot because of the electricity passing through it that it glows! This is encased in a glass bulb that’s filled with gas – these together protect the filament.

This glowing is an example of something called black body radiation. In simple terms, the visible light emitted by the filament is directly related to how hot it gets

An LED bulb, however, doesn’t have a coil of wire that heats up. Instead, it uses a component called a diode. These are special types of diodes called light emitting diodes – LEDs.

Instead of creating light through generating heat, a light emitting diode uses a principle called electroluminescence to create light.

Are They As Efficient As Incandescent Bulbs?

An incandescent bulb works by using the resistance of a coil of wire to generate heat – which in turn generates light. This means that an incandescent bulb is actually an incredibly inefficient way of generating light compared to an LED bulb.

Over 95% of the energy that’s used by an incandescent bulb generates heat, not light. That’s why it’s possible to get things called heat lamps – they’re essentially just large incandescent bulbs!

They put out so much more heat than light you can even cook with them – for instance, with the Easy-Bake Oven, a toy oven that used a normal incandescent light bulb as the heat source. Yes, you could bake a cake with a light bulb!

By comparison, an LED bulb is far more efficient. As it doesn’t need to generate heat to create light, the majority of the energy that is used by an LED is converted directly into light.

That means that, for the same amount of energy, you can power a lot more LEDs! This is one of the reasons why LEDs are becoming the standard for lights now – they’re so much more efficient.

Do They Use As Much Electricity As Incandescent Bulbs? 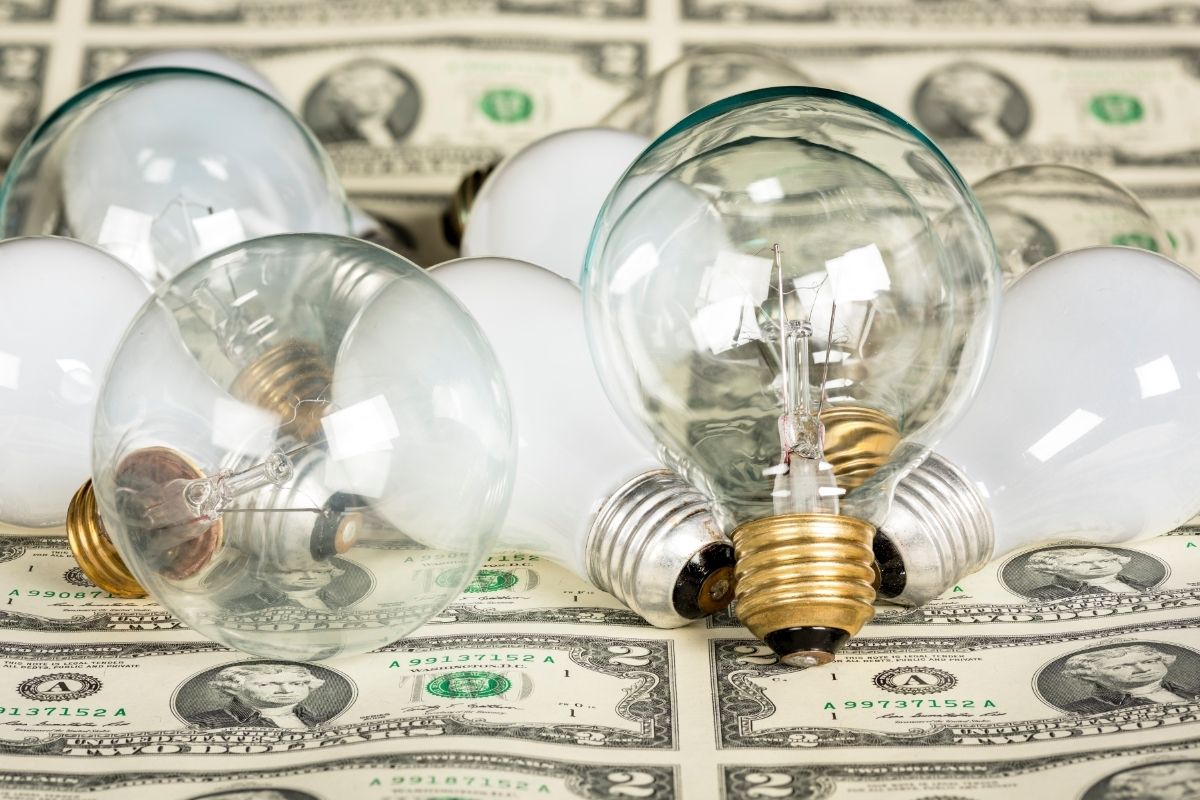 No – as they don’t use electricity to heat up a wire until it glows, they don’t need to use anywhere near as much electricity as an incandescent bulb that puts out the same amount of light!

Remember, 95 % of an incandescent light bulb’s energy usage is wasted on heat. That’s why, for example, a light bulb is so hot immediately after it’s been turned on. They can burn you within seconds – which is always an annoyance when you’re changing bulbs!

As you’ll know if you’ve ever turned a halogen heater on, they put out an enormous amount of heat as soon as they get power. They also seem to put out a lot of light too – well, they do, of course, as they are just really big light bulbs (or arrays of smaller bulbs)!

So, once you realize that a halogen heater is really essentially the same technology as a light bulb, you start to understand just how much electricity they waste on making heat! An LED doesn’t make all of this heat, so it uses less electricity to produce the same amount of light.

Do They Last As Long As Incandescent Bulbs?

No – they tend to last far longer!

An incandescent bulb is a really thin piece of wire that gets enough electricity passing through it to glow brightly. It’s a really simple principle – but no filament can last forever!

Especially not as, to make light bulbs mass-producible, and usable without consuming even more electricity than they do already, the filaments have to be really thin!

This means that, over time, the wear and tear of being heated – and also the repeated cycles of heating and cooling that happen when bulbs are turned off and on over their lifetime – will eventually wear the filament out.

It won’t explode, but it will likely make a little pop, and the bulb will go at least a little black. When you look at the filament, you’ll see that it’s no longer connected at both ends, but is instead dangling, or maybe even in pieces. The bulb is gone – time to replace it!

An LED doesn’t wear out in anywhere near the same time as an incandescent bulb will. They’ll last for a lot longer, for 2 main reasons.

The first is, of course, that they don’t produce anywhere near as much heat! Heat cycling is the thing that can kill most electrical equipment the quickest. When things get hot, they can expand a little – and when they cool, they shrink a little.

This still happens with an LED – but as it doesn’t need to heat a piece of metal to 5,480 degrees Fahrenheit in order to produce light, the LED will last a lot longer!

What If I Add More Lights?

You can add far more lights, outputting far more lumens, with LED lights, and still keep the same electricity costs as with incandescent bulbs. Or, you can keep to exactly the same lighting setup as before, but save a lot of costs on electricity – as well as a lot on replacing bulbs!

Whether you choose to add more lights, or keep the same amount that you have now – replacing incandescent bulbs with LEDs will mean you’re using less electricity to get the results you’re after.

The only real downside to LEDs is that they can cost a little more initially than incandescent bulbs do. However, this is offset by the lowered electricity costs, less frequent need for replacements, and much less downtime due to broken lights!

This is one of the absolute best things about LEDs! They are so much more durable than incandescent bulbs that there’s basically no comparison at all. Incandescent bulbs are so easy to break, that they’ll practically stop working if you so much as glance at them!

The filament on an incandescent bulb is so thin that it can’t help but be extremely delicate. And it has to be encased in glass because it’s the only realistic way of having a transparent material to protect it that can also withstand the extreme temperatures!

These two factors combine to mean that an incandescent bulb can’t help but be extremely delicate.

If you drop a table lamp with an incandescent bulb on the floor, for example, you can be sure that the bulb is done for – but with an LED bulb, you’ve got more than a fair chance that it can survive.

This is why your phone can have a bulb bright enough to be used as a torch, and a camera flash – an incandescent bulb of similar brightness wouldn’t last 30 seconds in your pocket!

Not to mention that a bulb that glows at 5480 degrees Fahrenheit is NOT something you want to be carrying around in your trousers!

LED lights are more efficient, longer lasting, and far more durable than incandescent bulbs. They’re essentially better in pretty much every single way that matters – which is why it’s no surprise that they’re quickly replacing incandescent bulbs entirely!