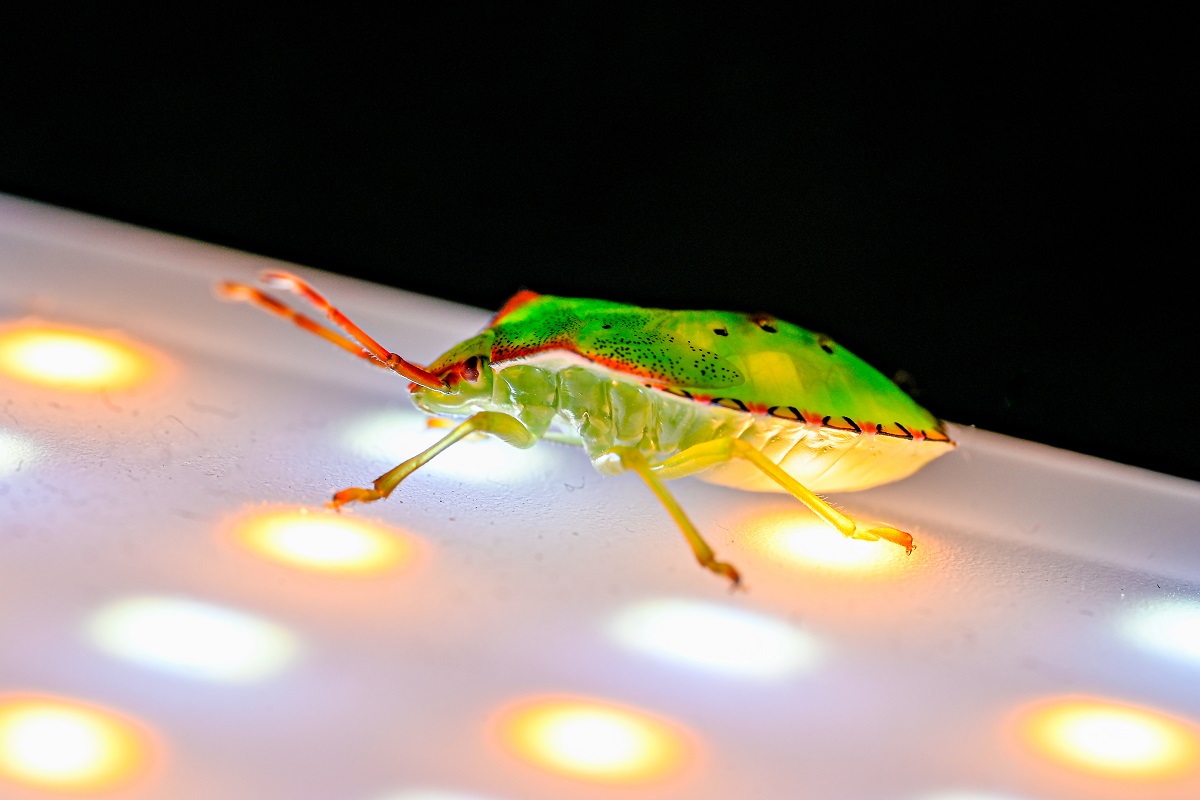 There is always a chance that you will have to shoot at nighttime. That can mean interesting shadow play yet may also mean your LED attracts some unwanted attention. Insects are drawn to lights and you can see this when you observe street lights coming on at night.

Whenever you turn on a light for an evening shoot, you have probably noticed bugs seemingly coming out of nowhere.

This invasion of nature can disrupt your shoot just by the sheer amount of bugs covering your light source. There is also the noise to consider and the general disruption caused by them flying into your shot. There may also be mosquitoes who could be considered a health hazard.

Undoubtedly you should want to do something about it as you could be missing out on some great shots.

Certainly, using bug zappers and bug spray are temporary solutions but you should consider using a different light bulb.

Incandescent and ultraviolet lights tend to attract a lot of bugs and there is an element of science behind that. In fact, bugs tend to be attracted to any light source yet LEDs are one way of reducing the presence of bugs.

You may still wonder, do LEDs attract bugs? We will look at that and more in this guide.

What Attracts Bugs To Your Led?

You may be surprised to learn that it is not in fact the LED itself that is attracting the bugs, rather the color spectrum involved by the light emission from the light bulb itself.

Though the type of light bulb can prove more attractive, bugs are specifically drawn in by the different color spectrums involved in the light bulb.

That’s right, color perception does exist in bugs and there is research to back that up. According to a study by the Department of Entomology in Pakistan, the blue spectrum can be considered the most popular as it attracted 22% of bugs.

Most bugs seek out the blue light wavelengths as they perceive light from 300 to 650 nanometers. By comparison, humans tend to see light from 400 to 800 nanometers which does not include ultraviolet light.

That study by the Department of Entomology in Pakistan did not involve photography but looked into the development of insect traps that used light to benefit the agricultural industry.

Concluding the study, they found that a further 18% were attracted to white, 10% to yellow, 4.7% to green, and 2% to red. The study also suggests that light bulb manufacturers, including those who make LEDs, cannot state that their light club will definitely not attract bugs.

If you are afraid of spiders then you may want to steer clear of LEDs and other forms of outdoor lighting that you may use regularly.

In fact, you may have noticed an increase in spiders and their webs near to the light source you recently installed. However, the spiders are not attracted to the glow of the light.

As bugs are naturally attracted to the light bulb’s color spectrum, spiders follow to be closer to a food source. Spiders are hunters so take advantage of the environment and benefit from the light bulb attracting their meals.

They also perform a duty of trapping and eating these bugs.

Do Bugs Prefer LEDs To Other Light Bulbs? 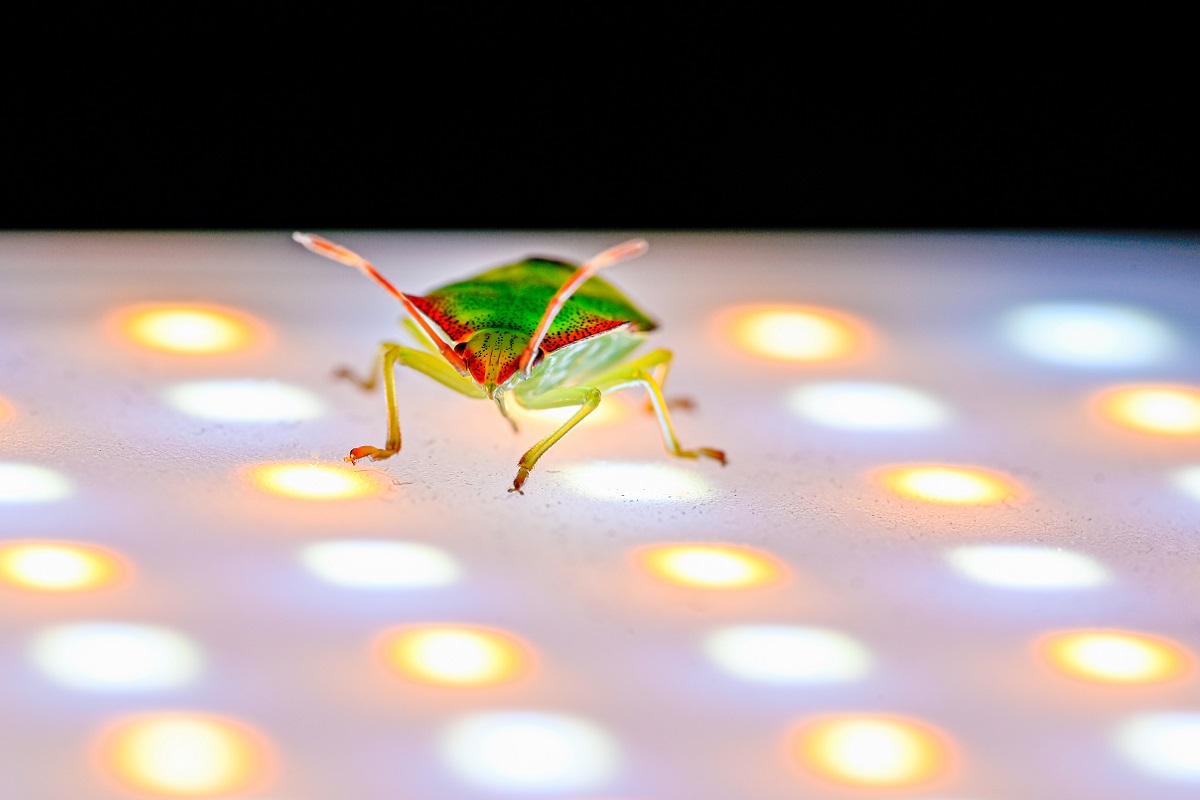 There is some debate about whether bugs prefer LEDs. Most of that theorizing is down to the fact that LEDs are cooler in heat and color tone than ultraviolet or incandescent light bulbs.

Conventional incandescent light bulbs typically emit a large amount of heat and are cooler in tone. These were traditionally used outside as they were the only available light source for decades.

Halogen light bulbs are also attractive to bugs as they emit a lot of heat too.

In some cases, heat forms 90% of the light bulb’s energy output which draws in insects who use heat receptors for navigation. When one of these high heat-emitting light bulbs is turned on, certain bugs, such as mosquitoes, consider that shift in temperature as an invitation.

If you do use traditional light bulbs as a light source, you may want to change to LEDs just to prevent so many mosquitoes arriving at your shoot. That’s because LEDs produce a tiny amount of heat thus fewer bugs are likely to be attracted.

Thankfully, technology has improved and you no longer have to suffer so many bugs. LEDs give off less comparative heat due to their better energy efficiency.

This simple fact should mean fewer bugs though it is still a light source so it may be a good idea to turn off your LED when you do not require it.

How Can You Reduce The Amount Of Bugs Being Attracted To Your Led?

Considering how bugs are attracted to three primary colors, which include UV, green and blue, you can use other colors. If bugs are drawn in to cooler tones on the color spectrum, try using warmer colors like yellow, red, and amber.

Bugs are less likely to register these tones, and thus less likely to be attracted to your LED. The LED can still offer a warmer tone which can be just as bright but you should see a reduction of bugs.

Apply the science and recognize that LEDs with higher light wavelengths fail to attract as many bugs as they simply cannot see them as well.

Yes, LEDs do attract bugs though this has more to do with the color spectrum than the light bulb. Just like the sun and the moon, bugs are attracted to light that they can see and navigate by.

By comparison, LEDs emit less light in the UV spectrum than ultraviolet or incandescent light bulbs. LEDs also emit less heat so they are less likely to attract certain bugs that are attracted to warmth.

LEDs are still a light source so they will still attract bugs. They may be harder to see for certain bugs yet they will still be drawn in. LEDs should attract fewer bugs than a traditional incandescent light but that may still mean a fair amount of bugs.

This could be more prevalent in winter as bugs are attracted to light sources and those that can offer warmth. Perhaps even in their search for breeding mates or simply due to the light acting as a navigation tool.

You can look to reduce this number further by using a warmer color tone which is recommended for landscape lighting. You could also buy an amber colored light in the 600-700 nanometer range which should attract fewer bugs.

There are also LEDs with a low ultraviolet emission which can further reduce the amount of bugs they will attract. LEDs that have been manufactured to preserve heat rather than emit it can also be useful in preventing a build up of bugs.