What Color Light Helps With Depression?

Light therapy, also known as phototherapy, is a type of treatment that utilizes forms of artificial light to try to reduce symptoms of conditions; both physical and mental.

Phototherapy can be used to reduce the symptoms of skin conditions, such as psoriasis and eczema, as it contains some anti-inflammatory properties.

However, phototherapy is largely used in an attempt to combat mental health conditions, including anxiety and depression, as well as sleep disorders and jet lag.

In the colder, darker months of the year, many people suffer from Seasonal Affective Disorder – also known as SAD. This condition is a type of depression, which many people believe to be caused by a lack of exposure to sunlight.

Sunlight plays an intrinsic role in our bodies’ production of melatonin and serotonin. Melatonin is a hormone produced by the pineal gland, which is often responsible for making you feel tired or lethargic.

When your exposure to sunlight is reduced, your levels of melatonin can increase, causing people with SAD to experience fatigue, which contributes to their depression in winter.

Serotonin is a neurotransmitter that is partly responsible for feelings of happiness, and which helps to stabilize our mood. It is also a vital component in the relationship between the brain and the rest of the body.

Low exposure to sunlight can result in lower than normal levels of serotonin, which, in turn, can result in low mood and depression. As SAD is thus largely caused by a lack of sunlight, certain types of light therapy can aid the fight against winter depression.

Light therapy can be used to reduce the symptoms of other types of depression, too. However, not all light colors are effective against depression. Carry on reading to find out which colors of light could help you to manage your low mood.

Red light is frequently used in phototherapy and chromotherapy to help reduce symptoms of anxiety and depression. The benefits of exposure to red light were originally discovered by NASA scientists, who found that exposing plants to red light while in space enabled them to grow more quickly.

They soon realized that the red light gave the plants increased energy levels, which in turn augmented their photosynthesis. Since then, scientists have discovered that red light can have similar effects on humans.

Red light has been proven to increase our bodies’ production of Adenosine Triphosphate, which is an essential form of energy that our bodies need in order to function. An increase in energy is often beneficial for those with depression, as one of the symptoms of depression is tiredness.

The more energy you have, the easier it is for you to do day-to-day activities, and to motivate yourself to confront your depression.

Despite the color blue’s association with low mood, blue light is actually one of the most effective colors when it comes to treating depression. The sun itself naturally emits blue light, which may be partly why artificial sources of blue light are good at replicating the sun’s effect.

Blue light has been proven to be particularly effective against the symptoms of SAD. One way that it counteracts low moods is by increasing alertness. Some studies have shown that exposure to blue light can improve reaction times, and generate quicker responses in the body.

This little form of an energy increase could really benefit those with depression. Blue light has also been proven to improve general cognitive function. Blue light can increase the brain’s memory capacity, as well as the overall performance of the brain.

This added clarity could help those with SAD to experience milder symptoms. Blue light has also been shown to readjust our bodies’ circadian rhythms, which can help those with depression to get into a healthier and more natural routine.

Another benefit of blue light is that it can decrease the levels of melatonin in our bodies, which in turn decreases fatigue and increases energy levels. However, blue light can also be relatively harmful to humans, for example to our eyes, so it must be used with caution.

Orange light has been found to stimulate the brain in a way that improves alertness and cognitive performance.

While an improvement in cognitive function does not always lead to reduced depression symptoms, it can help to combat the fatigue that those with depression experience. Any reduction of the symptoms of depression can help to heighten people’s moods. 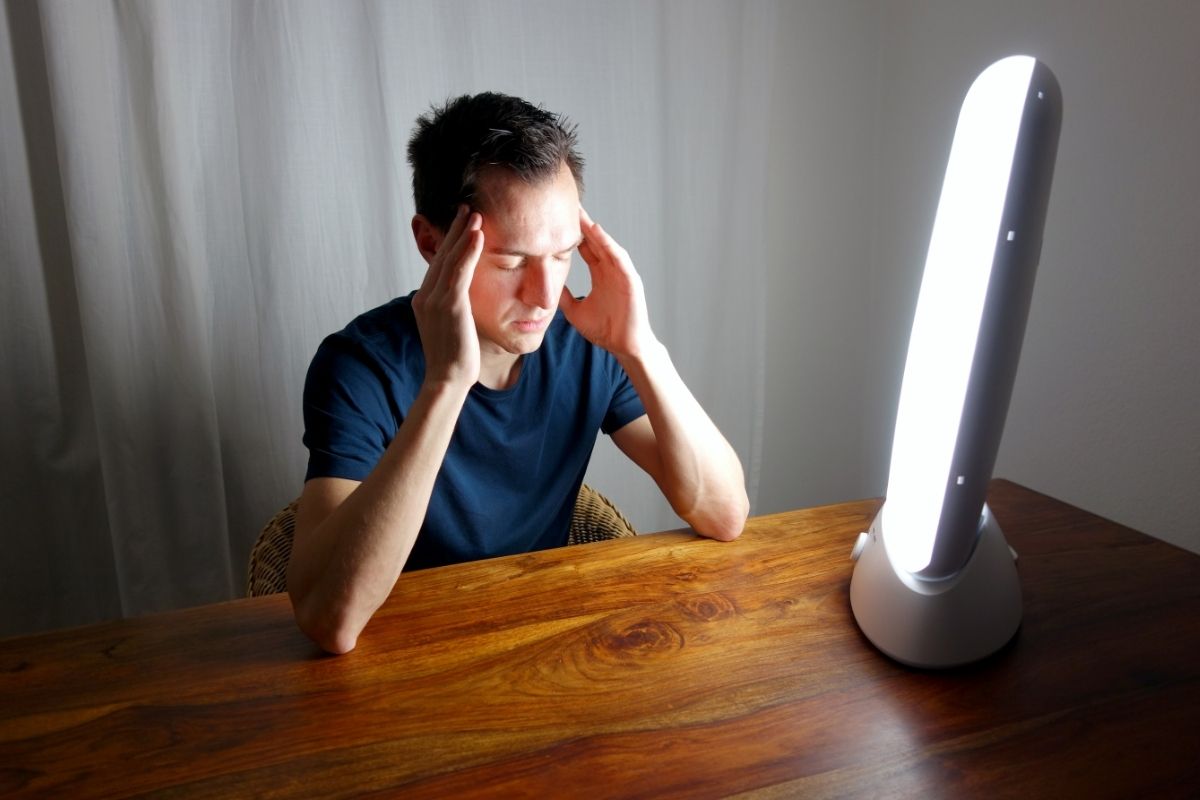 White light has one of the highest levels of success in terms of light colors when treating depression. When you are exposed to white light regularly, for example for thirty minutes three times a week, you will likely find that many of your symptoms of depression are alleviated.

White light can positively impact both SAD and other types of depression.

Firstly, there is evidence that exposure to white light can enhance the effectiveness of certain antidepressants, meaning that you could experience decreased levels of depression if you combine antidepressants with white light therapy.

Secondly, white light has been shown to increase certain people’s energy levels, which can reduce fatigue and lead to a more fulfilling lifestyle.

Sometimes referred to as amber light therapy, yellow light therapy can be very beneficial when trying to reduce symptoms of depression and anxiety. Yellow is often used in chromatherapy, as it is a very soothing and calming color.

When used in light therapy, it can reduce symptoms of depression by: stimulating the motor nervous system, calming your mood, relieving physical pain, and increasing energy levels.

Full spectrum light is light that includes all the colors of the electromagnetic spectrum, which range from ultraviolet to infrared. There are many light boxes available to buy which mimic the sun’s light by expelling full spectrum light.

Full spectrum light is beneficial for those with SAD, as it mimics the natural rays of the sun. It has been proven to maintain chemical balance in many types of animals, including humans.

These three things contribute majorly to the reduction of depression symptoms, and are partly why full spectrum light has been proven to be almost as effective as the use of antidepressants.

Light therapy has undeniable benefits when treating depression, particularly when the right colors are chosen.

While there is not yet extensive research on the subject, it is clear so far that red, blue, orange, white, yellow, and full spectrum lights are some of the most effective colors of light when attempting to reduce symptoms of depression.

Both Seasonal Affective Disorders and year-round types of depression have been shown to react very positively to these colors of light. As with any method of reducing depression, though, you should consult your doctor before beginning any sort of light therapy.