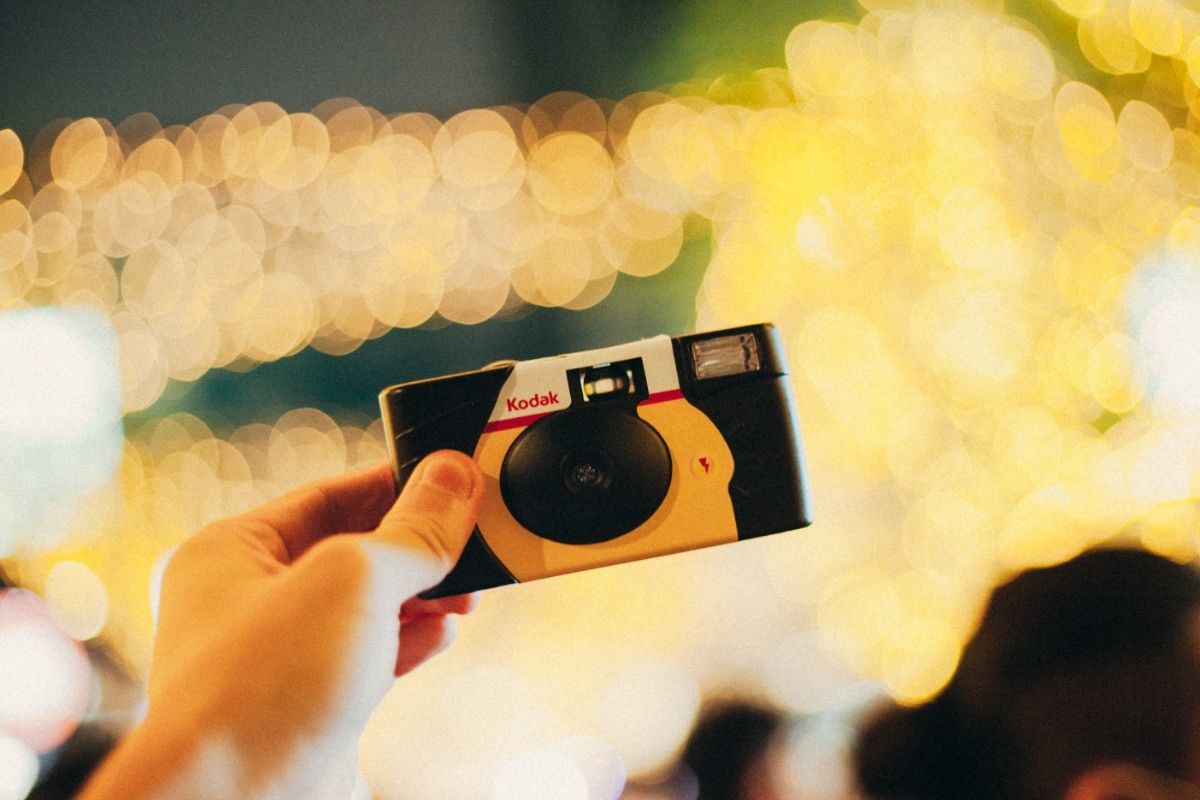 When Should You Use Flash On A Disposable Camera? (Should You Always Use It)

Certain situations almost demand that you should be using the flash. Whether that is on a DSLR, a smartphone, or a disposable camera.

Almost all cameras come with a flash but that does not necessarily mean you need to use it whenever you think you should. Knowing when to use a flash can make a real difference to your photos, especially with a disposable camera.

Flash photography was originally developed to allow amateur photographers to take pictures at night without having to carry bulky lighting equipment.

The idea behind flash photography is to illuminate objects from the front, the side, or above. This allows the photographer to capture images in low-light conditions without having to rely on artificial lights.

However, flash photography is not always ideal. For example, using a flash can cause glare and overexposure to your photos. If you want to get better photos, consider using a flash only when necessary.

Here’s why you should limit the amount of time you use the flash when using a disposable camera and only use it for the right conditions.

At What Distance Should Your Subject Be To Use The Flash

On a disposable camera, the focusing distance is usually fixed at around a single meter to infinity. That means most subjects will be sharp enough as long as they are over a meter away from you.

Then you have to consider the shutter speed, at 1/140 it should be sufficient to capture a person walking though you may get some motion blurring if you are trying to frame an action shot.

When Should You Use The Flash

If you want to use your flash during the daytime, only do so when it is particularly dim. This should be when the sky is covered with heavy gray clouds overhead or during twilight or at dusk.

You should especially use the flash on your disposable camera at nighttime or when you are in a dimly lit environment indoors such as a bar or nightclub.

Disposable cameras are great for nights out as you do not have to worry about damaging the camera as you would if you were using your smartphone or a DSLR camera.

Instead of taking so many photos on an expensive, valuable piece of equipment, you can use a disposable camera for a cheap, simple, and fun way of capturing a fun night with friends and family.

There are no flash settings to choose from on a disposable camera, you either use it or you do not which can get frustrating. It can be hard to judge when you should use the flash.

However, if you are struggling to see your subjects in the natural light then you should probably press the button or use the slider to select them.

This is unlike a DSLR camera which comes up with a range of settings that incorporate the flash such as the aperture to get the best quality image.

When Should You Avoid Using Your Flash

Certain situations dictate whether you use your flash. If you want to get a natural-looking shot then try to avoid using the flash on your disposable camera during the daytime when outdoors, when it is sunny, or even when it is cloudy.

You should also be careful not to have your subjects too far away as the photo will be a bit dark and certainly a lot more grainy.

Even when it is dark, you need to ensure that your subject is at a good distance away. Any closer than a meter away from your subject and it is likely to be too powerful, you may also temporarily blind your subjects.

Your photo may suffer from ‘ghost flash’ where the faces of your subjects are so white from the flash that they look like ghosts.

If you are taking a photo that includes a reflective surface like glass, water, or mirrors you may struggle to see your subjects once the photo is developed. This is largely because the reflective surface will reflect your flash.

Annoyingly, this will tend to create a large white patch where the shutter has captured the flash reflecting which can ruin a wonderful photo. 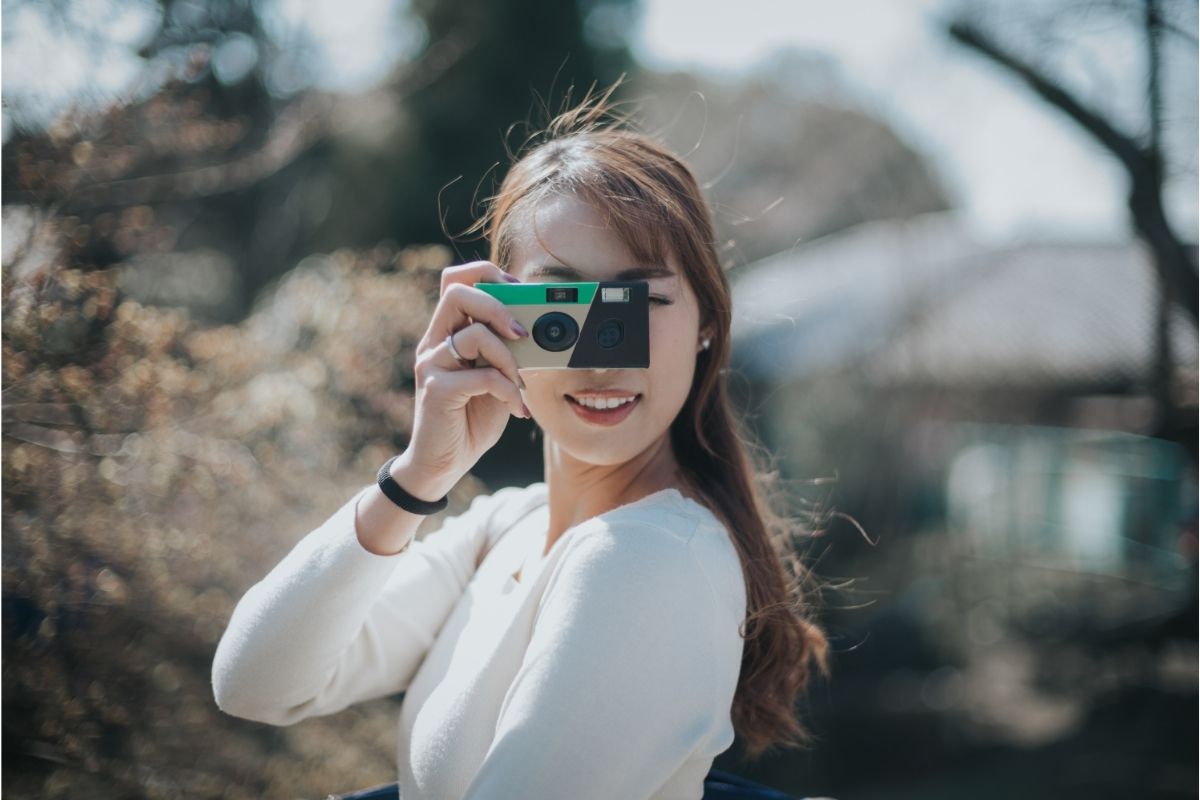 How To Use The Flash On A Disposable Camera

Unlike with a smartphone, DSLR, or even a digital camera, a disposable camera cannot sense the light conditions you are using it in. These are cameras from an almost bygone age where you have to manually wind on the film and select certain settings, including the flash.

When using a disposable camera, you need to judge whether you need to use the flash and then activate the mechanism to use it.

If there is little natural or artificial light available, you should use the flash. Turn it on by pressing a button or using a slide which is typically found on the top or back of the disposable camera and then wait until the flash is charged.

There should be a small LED that lights up red to indicate that the flash has been charged and is ready to be used.

Once the flash is ready to be used, raise the disposable camera to your eye than look through the viewfinder. When you are confident that you have everything in the frame, take a second to compose yourself and stay still while you hold the camera.

You are now ready to take your photo so press the large button on the front or top of the disposable camera and the flash should come on.

There should be a click that also indicates that the shutter has completed its opening and closing process to effectively capture the scene and take your photo.

You certainly should not use your flash all the time as you may create some undesirable effects on your photos.

Be careful as you may capture a reflection of your flash or overexpose your photos. Do not get too close to your subjects when using the flash as you may temporarily blind them.

Any flash will act as a second light source to help illuminate the areas where the image could be underexposed.

That means you should only really use the flash on a disposable camera when in a dimly lit environment, such as when outside during the hours of twilight, dusk, or nighttime.

While indoors, using the flash on a disposable camera is an ideal way to capture a night out in a bar or nightclub without worrying about carrying a bulky, expensive phone with you.