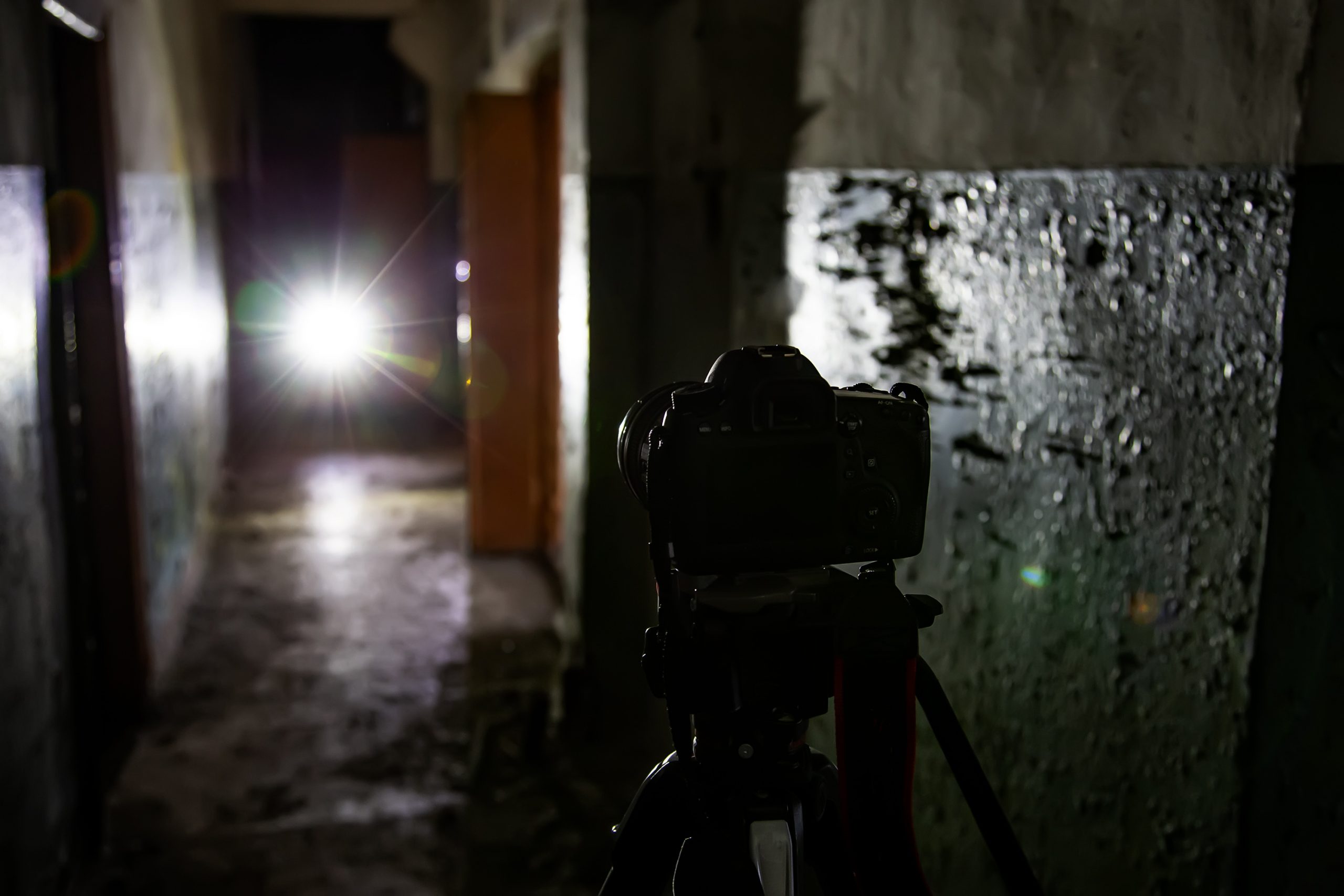 9 Best Slave Flashes for Every Budget and Purpose

There are lots of slave flashes on the market, it’s crazy!

Which slave flash is right for your camera, subject, and budget?

Can’t go wrong with one of these three:

Today you will learn the best slave flashes to help you choose the perfect tool for your photography.

9 Best Slave Flashes For Every Budget and Purpose

9 Best Slave Flashes For Every Budget and Purpose

Godox V1-C for Canon
The Godox V1 is a smart choice for photographers who want a slave flash with a fast recycling time and an effective power-saving feature for when it’s idle. 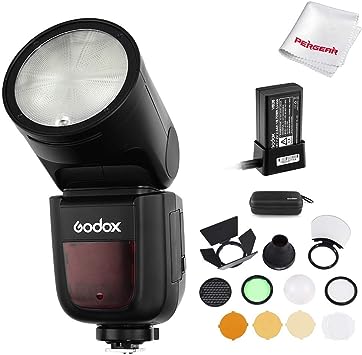 The Godox V1 is the best slave flash because it emits a much more even light output from centre to edge than most flashes. It also has an impressive build quality, and can deliver up to 480 full-power flashes from one charge. 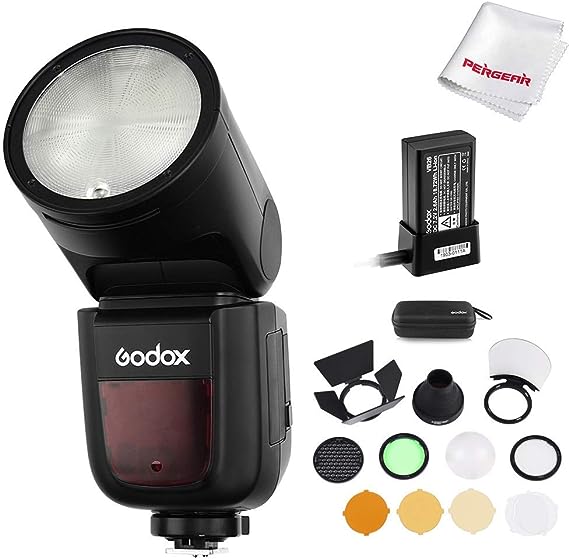 The smooth drop-off at the edges of the V1’s light isn’t the only thing that makes this a professional photographer’s best friend.

It’s got an excellent recycle time, and the included lithium battery not only recharges quickly, but it has a really convenient USB C charging port so you can quickly plug into any USB socket. 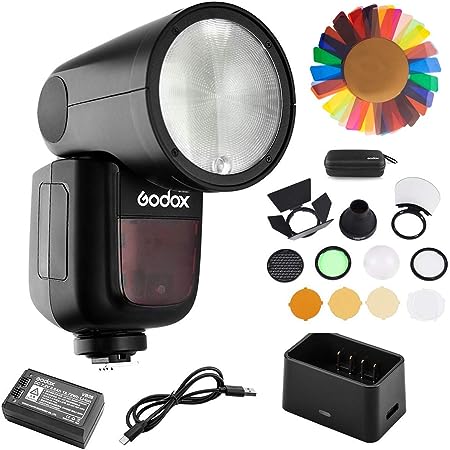 and even has a built-in power saving feature which activates after an hour of being idle. 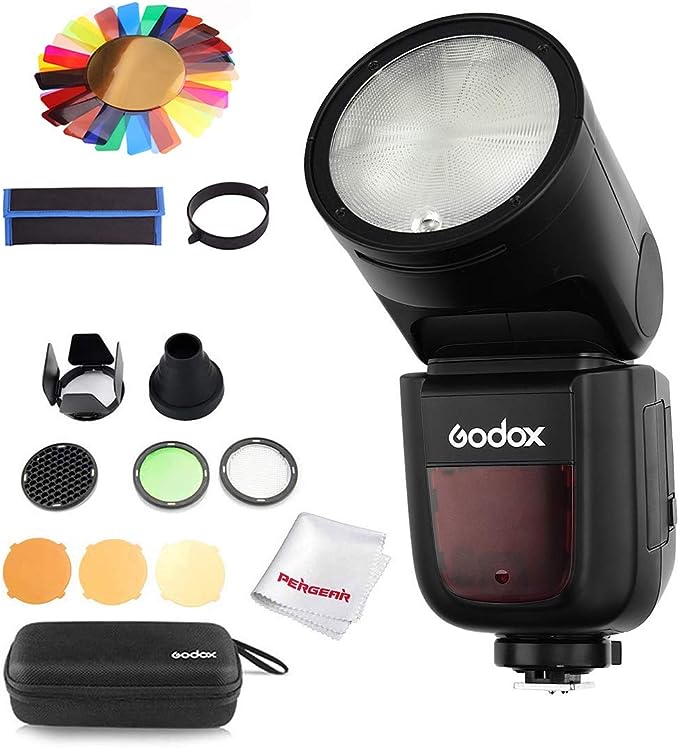 Most pro photographers love a versatile light, so you’ll be pleased to know that the V1 is compatible with a range of magnetic snap-on light modifiers like barn doors and diffusers.

Key Features Of The Godox V1:

Godox V860II-Canon
With up to 650 full-power flashes from just a 2,000mAh battery, the Godox V860II is a great option as a budget slave flash. 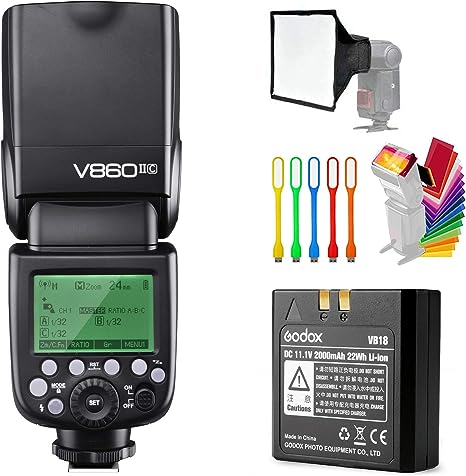 The Godox V860II is the best budget slave flash because it can fire up to 650 full-power flashes on just one charge of the 2000mAh Li-ion Battery – for under $180.

This is ideal if you photograph significant events, such as weddings, graduations, and other ceremonies. 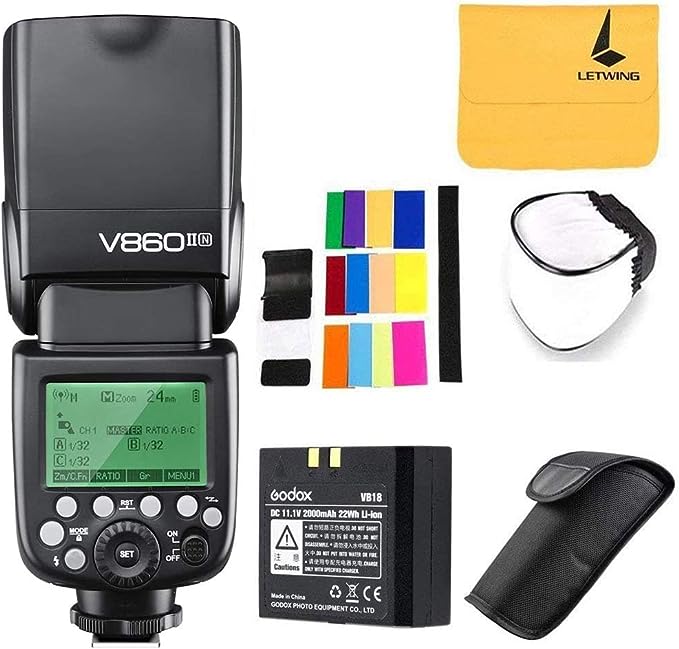 You can dial down the power output of this flash in 22 steps, for the perfect brightness level. At full-output, the light from the V860II is clear and bright, with a guide number of 60, making it suitable for shots at a reasonable distance.

There’s even a softbox included, allowing you to create a nice soft and diffuse light. 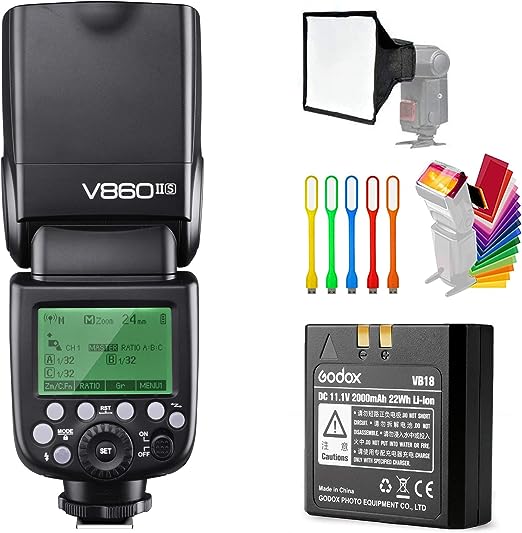 Other slave flash units may cost twice the price of the V860II, and many don’t offer the same intuitive features that this unit does.

Features like an interactive LCD display which turns orange in slave mode and green in master mode, so you can easily identify that you’ve got your settings correct for your application. 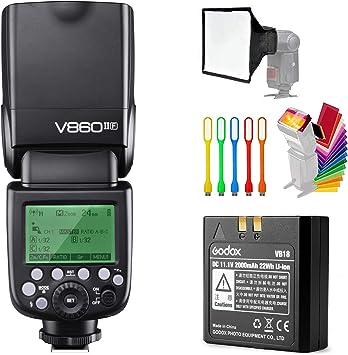 You can trigger the unit as a master flash at distances up to 100m thanks to the well-known Godox wireless X system, or of course use the optical mode to set it up as a slave flash.

The Godox V860II is compatible with Canon, Fuji, Nikon, and Sony cameras; you’ll just need to pick the right unit for your brand.

Key Features Of The Godox V860II:

Godox TT520II
For less than $45, the Godox TT520II is a fantastic and accessible option for budding photographers with its user-friendly interface and built-in triggers. 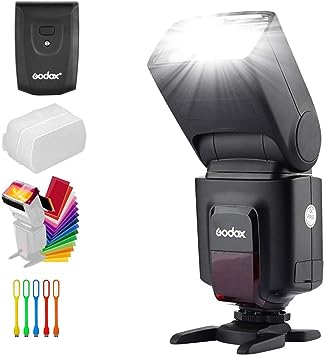 The Godox TT520II is the best cheap slave flash because it has a built-in optical trigger, RF trigger, and automatic power-saving features—all for less than $45.

The two triggering options mean you can use the TT520II as either a master or a slave, and the power-saving features help to maximise battery life for long shoots, and prevents the unit from overheating.

That’s not the only place where this flash packs in a fair bit of versatility for the price.

You can set the output level of the Godox TT520II in eight different tiers, and set the flash duration from 1/300s to 1/20000s. That’s roughly the same as many more expensive units, so it’s nice to see this level of flexibility in such an affordable flash from Godox.

The TT520II’s user interface resembles the standard system for an entry-level flash, with buttons and dials that are embedded in the unit rather than an LCD display.

Plus, it comes with a diffuser for creating softer, more evenly distributed light.

This is a great choice for entry-level photographers, and works well with Canon, Fuji, Nikon, Olympus, Pentax, and Sony DSLR cameras.

Key Features Of The Godox TT520II: 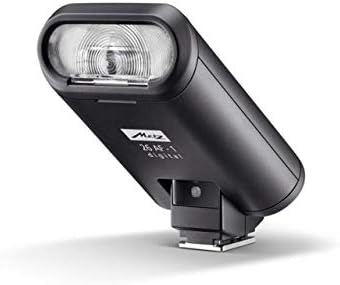 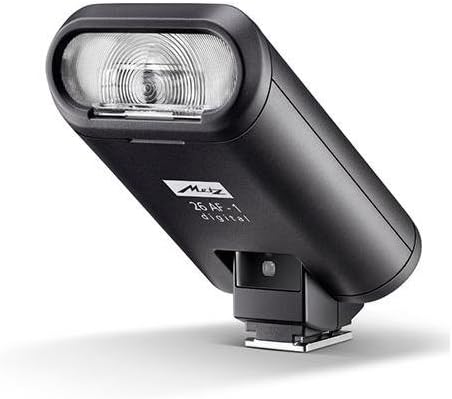 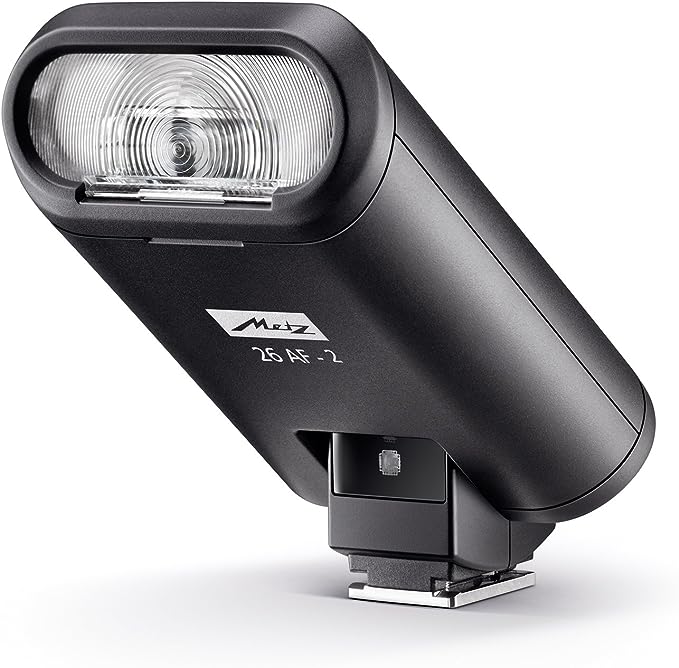 The Metz Mecablitz 26 AF-1 is the best digital slave flash because of its plug and play functionality.

This compact flash works well with pretty much any compact DSLR or mirrorless camera with a hot shoe adaptor, meaning you can grab the Mecablitz 26 AF-1 straight out of the box and get to it.

It doesn’t swivel, but it does tilt up to 90-degree so you can use it to bounce light off of a ceiling or reflector for a more subtle effect.

What’s more, it works as a slave flash, or can be triggered via TTL. 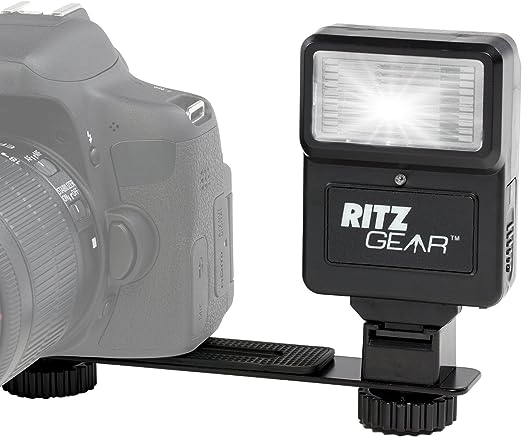 The Ritz Gear Digital Camera Flash with Bracket is the best digital slave flash with a bracket simply because it is compact, lightweight, and is versatile enough to use for indoor and outdoor shoots.

Not only that, you’ll be surprised that it may even fit your camera’s hot shoe. The flash is designed for digital cameras, but it also works well with DSLR, and SLR units.

And despite a retail price under $15, it’s made of durable metal, meaning it should go the distance.

The Ritz Gear Digital Camera Flash with Bracket is an ideal choice for beginners, although it’s also a good choice for anyone who wants value for money. 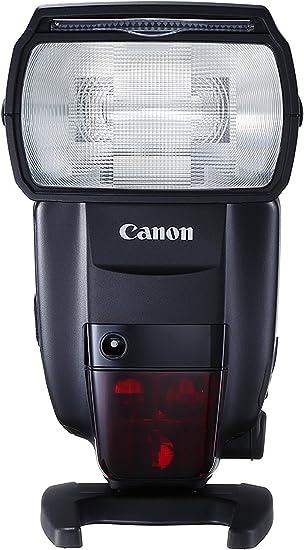 The Canon Speedlite 600EX II-RT is the best slave flash for Canon because it’s powerful enough to illuminate even the darkest of places at night.

This is possible through the speedlight’s multiple flash system that can control up to five groups between 100 and 700 flashes.

It’s useful for event photographers who need a powerful flash fill inside a dimly lit club or music festival.

And since it’s equipped with wireless shooting for optical and radio transmission, you’ll have a better functional range for flash control. 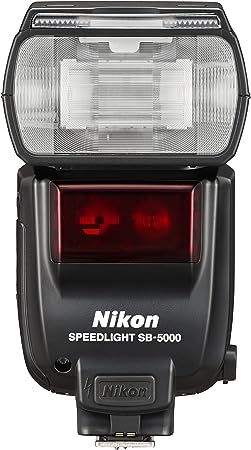 The Nikon SB-5000 is the best slave flash for Nikon because of its cooling system for 100 consecutive shots, which you can do without producing underexposed images.

Flashes that overheat are a major nightmare, and unfortunately many pro photographers have experienced this issue before, especially when using high-output units.

The Nikon SB-5000 is designed with heat-shedding functionality and a built-in cooling system so this isn’t going to be an issue.

It also boasts an incredible wireless functionality which allows you to connect up to 18 remote flash units, making it an epic option for event photography. 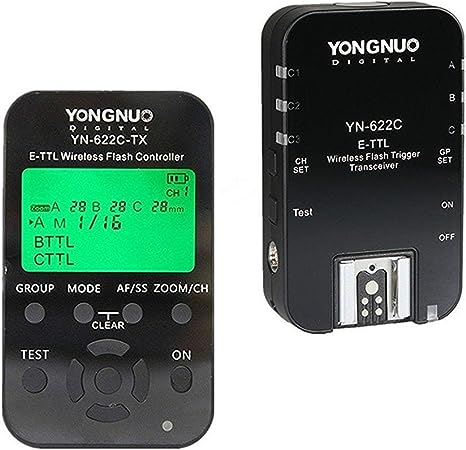 The YONGNUO YN622C-KIT is the best flash slave trigger simply because it allows you to control flash functions from your camera menu, making for fast edits.

It offers high sync speeds of up to 1/8000s, and with a remote distance of up to 100 meters, it can trigger an external strobe effectively. 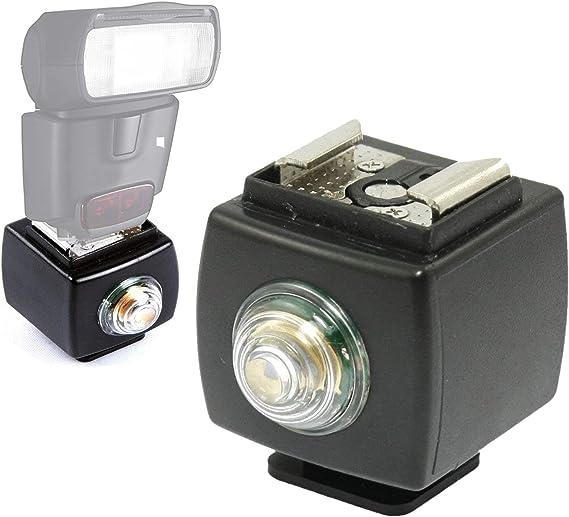 The Seagull SYK-3 is the best optical flash slave trigger because you can use it directly without charging it or using batteries as a power source.

While its remote distance coverage is only 20 meters, the SYK-3 as a slave flash is compatible with standard hot or cold shoe flashes.

You can use it for Canon, Fuji, Godox, and Nikon cameras. It also works well with Olympus, Panasonic, Pentax, and Yongnuo.

With just the built-in flash on your camera, you’ll never be able to achieve the high-definition shot you’re looking for.

A slave flash can take your photography to the next level, so choose a model that works with your camera, your style, and your budget.